Alongside Rutgers scientists, students will develop a program that addresses anti-idling laws 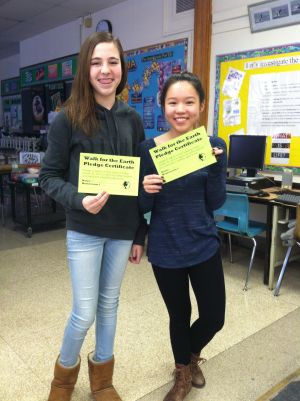 Grover Cleveland Middle School eighth graders Olivia Carrara, left, and Kelly Chang, both of West Caldwell, hold up signs the Ecology Club used during Walk for the Earth Day last October, during which 150 more students than usual walked to school. They gathered with the rest of the Ecology Club on Tuesday, Feb. 18, to begin working on this year's video project about anti-idling laws. Both students will be attending an upcoming Rutgers workshop.

CALDWELL – Nine students in the eighth-grade Ecology Club in the Caldwell-West Caldwell school district will work with Rutgers University scientists on Thursday, March 27, to develop school or community projects that address climate change.

This year, nine students from Grover Cleveland Middle School (GCMS), are participating in the program, hoping to instill change both at home and beyond.

The team is made up of eighth graders Diana Riestra, Emma Ogando, Jack Payne, Megan Norton, Kelly Chang, Ian Robson, Olivia Carracara, Alex Rosa and J.M. Riestra, who will compete with many other teams from around the state to develop, implement and video a school or community project that addresses climate change.

There are actually about 15 students in the climate change group, out of which nine self-selected to present at the Rutgers Summit.

“Only nine self-selected for the presentation, but the others are important too,” Kinkle said at an Ecology Club meeting at GCMS on Tuesday, Feb. 18.

Eighth-grader Diana Riestra of West Caldwell will be filming the video.

“I’ve always been interested in global warming,” she said at the meeting.

She was introduced to Ecology Club in sixth grade through a friend. Working on the club video has been her goal ever since. “I’ve been in ecology club for three years,” she said. “I love making videos on the computer, so I thought I’d like to do that when I was in eighth grade.”

GCMS also participated last year. “We submitted a video about our project, which was to discourage plastic pollution and encourage GCMS students to use reusable water bottles instead of the disposable ones,” said Kinkle.

"The kids sold lots of water bottles, presented their video to Caldwell's (Borough) Council and a slideshow to the Caldwell-West Caldwell Board of Education. The video got an honorable mention at the 2013 Summit as a Viewers' Choice."

This year's project involves getting more kids to walk to school and raising awareness for the new no-idling ordinance in Caldwell, Kinkle said. The ordinance prohibits vehicle idling for longer than three minutes, even in a private driveway.

The club hosted a "Walk for the Earth Day" last October. Prior to walk day, the students created a survey, which was given to every GCMS student. The survey provided information on how many students actually walk to and/or from school each day.

The walk day increased the number of walkers by 150 students.

In order to support the town's no-idling ordinance, club members plan to meet with the Caldwell Environmental Commission in March, provide informational flyers to parents who drop off or pick up students at school, and post a banner in front of the school to make both parents and students aware of the no-idling ordinance. They will also produce a slideshow to show in homerooms about the time the flyers are distributed. The slideshow will be about idling and its consequences for human health and the environment.

Ian Robson of West Caldwell also worked on the video last year. Of the visit to Rutgers he said, “I’m excited about going with everyone else. You know them all and get to know them better.”

“It was really cool to be able to be surrounded by kids who all wanted to help,” said Kelly Chang of West Caldwell regarding the first trip to Rutgers.

J.M. Riestra of West Caldwell said, “It was really nice to be able to be surrounded by kids who all wanted to help.”

“You, group, are the warriors,” Kinkle said to her students. “You’re on the front line telling people that one aspect of climate change is idling.”

The group will present its video to the Caldwell Borough Council on Tuesday, March 4.

The Teen Summit has been in existence for five years, said Janice McDonnell of the 4-H Department of Youth Development at Rutgers. In 2014, 16 schools are participating.

McDonnell said that the purpose of the program is “to give (students) a grounding in science so they understand what we know about climate chance, what it does, the evidence for it.

"The other half is the opportunity for them to think about what to do with that knowledge, how they live in this world, how they in their own lives contribute to this global problem. So that’s the service learning step. Once you understand the problem you can apply that to the problem in your own life.”

On March 27, students will return to Rutgers to learn how the university is going green, which will include a tour of the University solar farm and Rutgers laboratories.

Professor Ben Horton, who specializes in sea level rise research, and other professors from the human ecology program, will help out the middle school students, McDonnell said. “A whole host of graduate students” will also be there to advise them.

Scientists at Rutgers are also exploring how to make smart plants that can convert their own starches to fermentable sugars, necessary to create efficient biofuels, according to the summit’s website. Students will present their plans of action and results at the summit and will be recognized for their work.